Unbelievable, but again the Spanish Agencia Tributaria has put an embargo on my new Spanish Openbank account(specific for paying taxes), after they did that in 2018 also with my Bankinter account. Making paying taxes impossible themselves!

I do not have any money, only my monthly pension from the Dutch State and a bit more. Total 1550 a month or so before taxes. From that I have to live on 100 a month or so after paying fixed costs. So saving any money is difficult, specific as I still have to defend myself against the Dutch persecution and have some extra costs for my blog and a server, keeping a computer and cheap mobile phone, and of course extra costs for all the follow up damages caused by the secret Royal Dutch cover-up and conspiracy. The largest ever in the history of the Netherlands!

The Dutch made sure with a large secret Cordon Sanitair around me since 1977 that I could never pay everything when they took away my high income of 145.000 euro a year! Also in 2003 by secretly(!) giving me an antipsychotic hidden as a daily baby aspirin 100mg. And they made sure I could not file charges against the rapist of my wife! The police themselves(!) were NOT ALLOWED to make an official document! And they manipulated all evidence, or deleted it, and much more.

I also got 40.000 euro less income since 2009 because of the fact that even in innocent detention my pension and more are blocked assuming I was a criminal!

I could not defend myself in the Netherlands, all lawyers refused to help me and no defense was allowed! And I was forced into exile in Spain as a fugitive, therefore forced to ask for asylum three times with a total 15 months in detention, and another 13+1=14 months innocent detention in the Netherlands after an unfair political trial without a lawyer(nobody present but the judges!).

And on top of that the corrupt KLM Co-Pilot King Willem Alexander lying and blocking the asylum I was offered in the air above America on March 15th, 2017 after President Obama himself intervened in favor of my case.

In detention they stopped my income from my incapacitated insurance and pension for total of around 40.000 euro as a punishment! While I am the victim only defending myself and my defenseless wife with severe dissociation and even an extra emotional personality who has no memory of all the rapes done to her.

And in Sept 2013 I had to spend almost 10.000 euro for flights and hotels trying to reach Texas! First through Canada and later Mexico because the Dutch several times tried and succeeded(!) to block my travel to reach Canada and Texas for my second asylum request after being innocent sentenced in the Appeal case in Dec 2012! Which are severe human rights violations.

And I lost a 250.000 euro(my saved pension money) since 2004 because I had to fight against my own(!) Dutch State and pay extra costs to detectives, a monthly 2000 euro to my mentally very sick defenseless wife in the Netherlands when I was in exile in Spain, and for the three asylum requests(flights/Hotels), and much more.

Also a group of Dutch people in Jalon, Spain in 2011 stole 300.000 euro from me being hired by the Dutch Criminal Organisation behind this cover-up and conspiracy! I filed charges against them in the Netherlands and in Spain, but heard nothing as is normal in this case. Everybody simply neglects me. With my 300.000 euro, from a book and movie deal, I could have paid all the Spanish taxes easily and raise my pension to a more normal level! And pay for legal help if they dared to help me against the corrupt intimidation by the Dutch King.

So therefore I can never alone without help pay the Spanish taxes over 2012, 2013 and now coming 2016. And the Dutch refuse to pay an advance on my damages.

Nor my extra costs to defend myself against the Dutch persecution with a 10.000 to reach Texas in 2013, and 7000 in a fine to the rapist of my defenseless wife.

In 2014, 2015 and 2017 I had to pay tax in the Netherlands because I lived there to divorce my wife at last on her(!) request! But Spain wants me to pay double tax for 2014 and 2015. With 2016 soon coming. Because I could not file in time, which is impossible from a jail where I was innocent(!) being the victim of the largest known cover-up and conspiracy in the known history of the Netherlands.

But I was able to pay the tax over 2018 and 2019 in Spain again, but now the last second part of 760,66 euro is impossible because of the stupid Spanish embargo on my new Openbank account and the fact the Spanish stupidly refuse payment by any bank account outside Spain! Which is also against EU regulations and laws.

I found with a bit of luck also a list of all the current fines or taxes I would have to pay, including the double in 2014 and 2015 and an absurd over 2012! Never found that list before! And 3 gestor’s are not able to handle a case like mine.

And below that, a list of all the documents they keep sending me also to pay, but being almost broke after 45 years of Dutch persecution, I am not able to pay anymore after paying far to much over 2009, 2010 and 2011. And I do not understand what they mean with all that even in English. Hiring a high level tax lawyer without money will not be possible of course. That would cost at least 5000 euro if they understand my exile situation with extreme high costs and are willing to defend me with that as the context. Simply told I paid too much taxes in Spain and Netherlands. 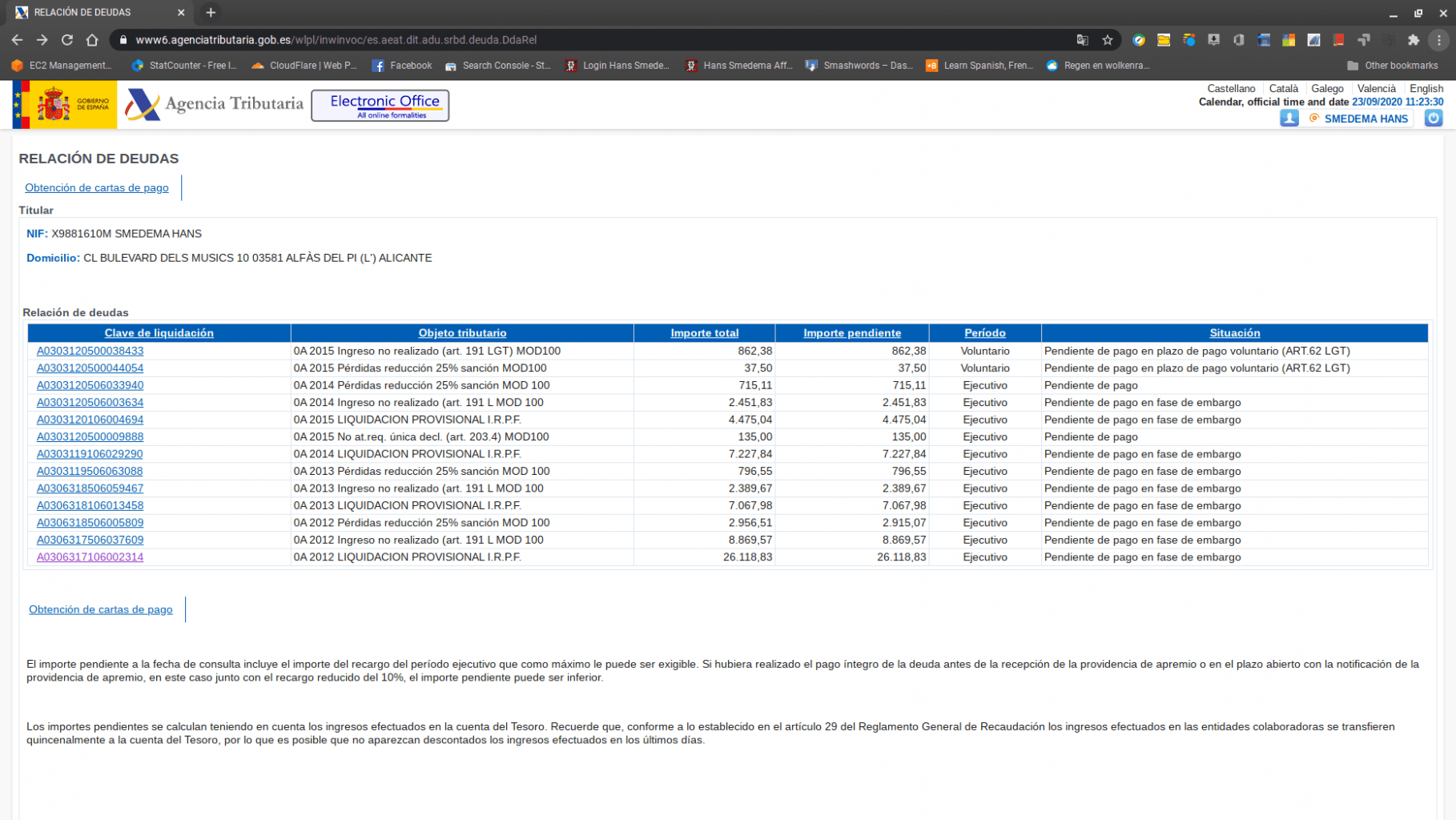 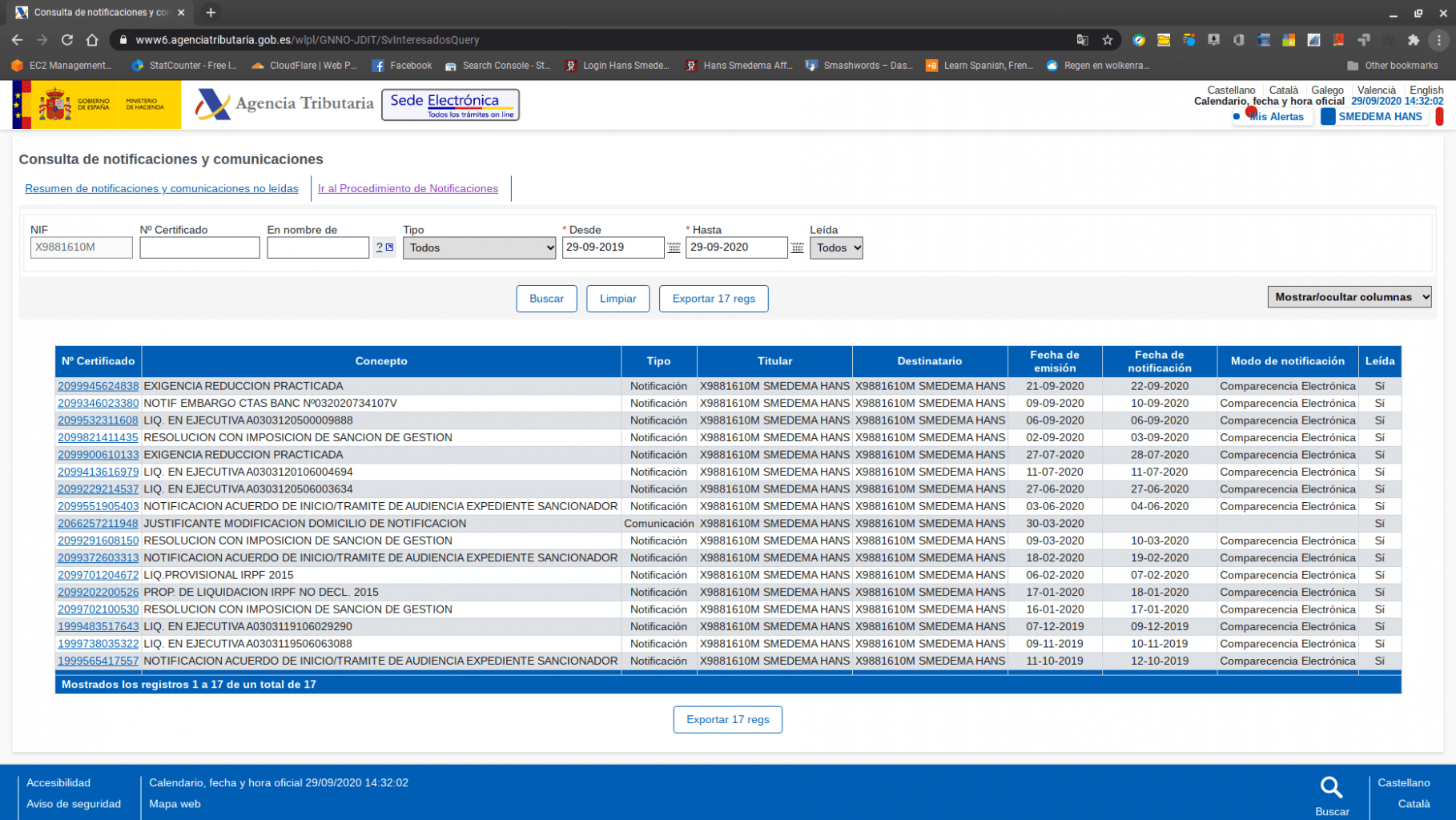 But in the years 2009, 2010, and 2011 I paid too much tax as they did NOT deduct the 25.000 euro I paid to my mentally sick wife in the Netherlands! I paid around 16.000 or 40.000 in those 3 years. But without legal help and the Netherlands(family and justice) even denying the fact that my wife had severe dissociation and an extra emotional personality(DIS), I was powerless to fight back. Since 2000 no lawyers dared or were allowed to help me probably based on State Security because of the involvement of the retard Dutch Royals. Also, I did NOT know I secretly got an antipsychotic because they/some assumed I was insane or delusional based on the lies and betrayal from my and her family, my sick wife, including the Dutch Ministry of (In)Justice.

How do you defend yourself against that all without any legal high-level help?

For anyone interested in my ordeal reed this long unbelievable summary:

Timeline all most crucial events!

Payment is only(!) possible when I make an appointment in person with Agencia Tributaria and ask for a special form, and have somebody from my family, which I don’t have, or a stranger(!) to pay my tax after I pay them cash! Which I refuse to do, of course, I am not involving others in this Spanish tax problem.

Spain now put twice an embargo on two bank accounts, and both cancelled therefore my account!

Paying simply with my Dutch Rabobank account or Dutch credit card is NOT ALLOWED BY SPAIN ITSELF.

Received a Model 102 tax form to pay cash the last 760,66 euro cash at any collaborating(!) bank from Guillermo Barros Gallego Departemento de Recaudacion! I will now pay before Nov 5th, 2020 the last part! That leaves only 20012/13/16 as problems!

On Oct 30th, 2020 I was after more trouble with hours work to pay cash at the Sabadell Banco in Albir! What a relief at last!

Here my letter to Administracion de Benidorm from Sunday, Sept 27th, 2020 with a very fast verbal answer on Monday!

Why do you make it impossible to pay Spanish taxes?

Now 3 Gestors refuse to help my special case of persecution by the Netherlands against my person taking away my civil rights, taking away my income, taking away part of my pension, and causing high extra costs to defend myself by asking for Asylum in America three times in 2009, 2013/14 and 2016/17.

When I was in the air on a KLM Plane Dutch King Willem Alexander as KLM Co-Pilot lied and criminal(!) refused to confirm the fact that I accepted(!) the offered Asylum by Judge Rex J. Ford on March 15th, 2017.

The last one Perez in an email a few days ago said that this case is too difficult for them and I should look for a high level International Lawyer organisation. But that will cost many thousands I simply do not have! 5000 to 10.000 euro?

Making an appointment(cita) will not help as I do not speak enough Spanish nor do I understand all the difficult terms you use in your Agencia Tributaria system. And I know you do not have any English speaking employees or even Dutch, if they could explain my options now.

I am entitled to a large (millions) damages payment from the Dutch, but for that I will first need a lawyer who all cowardly refuse my case with the Dutch King and Dutch State Security involved. So paying you will be easy if you can assist me in finding someone who forces the Dutch State to pay! It could very well be that you legally have the right(using tax laws?) to make a claim against the Netherlands?

I made a financial deal over a debt of 5000 euro with the Dutch tax to pay 72 euro a month for two years, which brings my current income to a Dutch social minimum allowed in the Netherlands.

I estimate it will be at less than 1900 euro which I cannot pay at the moment without first getting the Dutch to pay my millions of damages.

So, to pay the second 760,66 euro I will need a cash(caja) Model 100/102 form! Or accepting a foreign Dutch/EU credit card! Can you send that or direct me how to do that in your system?

How do we solve this?