My petition was declared inadmissible on July 15th, 2021 by email from Nov 8th, 2021 because the legal case was not good enough to proof which EU Laws were broken and why! Still almost 4 months investigations. 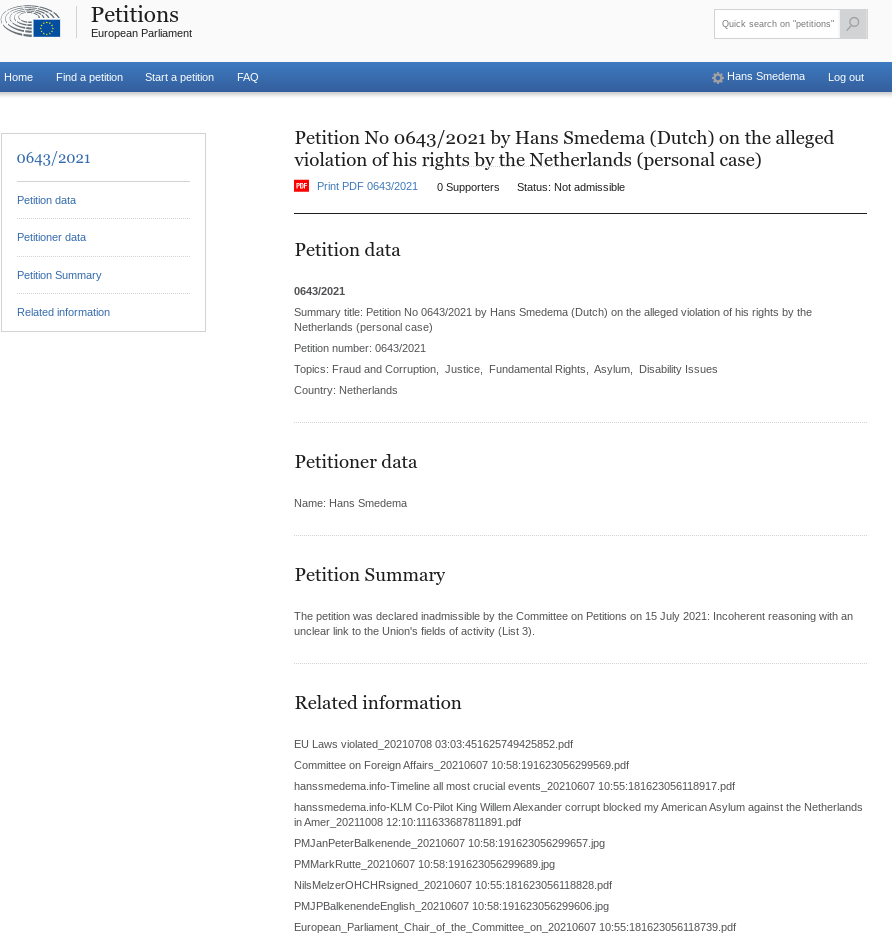 Of course not having any legal help since 2000 is the most crucial reason for all my trouble in fighting the largest cover-up and conspiracy ever in the history of the Netherlands! In fact legal help is forbidden as I found out after forcing(!) a Lawyer(mr. Ad Speksnijder Leeuwarden) to help me. He did nothing when somebody(justice) came just before me, put a recording device in his office, and apparently forced Ad to do nothing at all. Ad also refused to go with me to the official hearing Medical Discipline College Groningen! Most likely they secretly have placed me under Government Control based on false info from my mentally sick wife, taking away my normal rights and giving it to the Omerta Org of my corrupt brother Johan Smedema from Gennep before we married on Feb 23th 1973. When secretly(!) two people from Justice had to sign also after we were married to make it legal. Worse than famous Franz Kafka’s The Trial!

For the text of my petition see my post…

The fact that President Obama himself just before leaving his office in Jan 2017 started the case America contra the Netherlands State at the UNCAT or equal UN Special Procedure is of course evidence that I have a good case for also EU Parliament and EU Commission. If only I had legal help which the Netherlands should provide.

So that leaves this petition for maybe second time, but now with a better legal case proving that the Netherlands violated EU Laws.

And when I have that legal case I could also file a complaint with the EU Commission!

And of course I could write Top level EU leaders to put pressure on the Netherlands to end this decades long horrifying criminal cover-up and conspiracy.

And finish part 5 J’Accuse of my Ebooks Fighting the Unknown and start the commercial version which is a condensed version of the 5 parts.